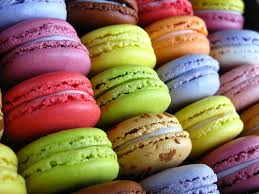 Palma Mallorca Spain - Saturday July 27, 2019 - The world leading fine French Pastry bakery and sweets maker, Ladurée of Marcq-en-Barœul, France has selected Vegan Gastronomy Culinary Academy as “the engine” behind its Vegan Macarons. Founded in 1862, Laduree is one of the world's best-known premier sellers of the French Macaron, 15,000 of which are sold every day. In a quick and rapid acceptance of the world demanding vegan options Laduree evaluated and choose the world’s leading vegan cooking academy’s approach of using potato protein and pine tree cellulose to making vegan macarons. The vegan cooking school expanded in 2018 to create a “behind the scenes ingredient company” called Free From That. Vegan Gastronomy announced that is has recently begun shipping volume shipments to Laduree’s vegan pastry factory in Beverly Hills, California which has been designed to be the vegan center for the famous Laduree of France.

“It took us a few years to perfect what was behind making the perfect Macaron texture, ultimate neutral taste, excellent stability and ease of crafting this culinary art piece in all types of environments,” commented Manuel Lynch, CEO of the world’s leading Vegan Gastronomy Culinary Academy. “It was our focus 3 years ago to be the egg-free solution provider around the world and today we are realising our efforts, we have functionally replaced all functions of the egg.”

Vegan Gastronomy, a Las Vegas, USA headquartered company has its leading chef training center and its product development team located on the island of Mallorca Spain in the middle of the Mediterranean Sea. The academy leads the world in showing people both in person and online how to make the world’s 10 most difficult pastries to make including: Macarons, Choux Pastry Eclairs, Soufflé, Creme Brulee, Tiramisu, Lemon Meringue Pie, Baked Alaska, Baklava and Strudel with handmade paper thin filo pastry, multi layered sponge cakes like Black Forest, French Entremet patisserie style mousse cakes coated in shimmering glazes one can see their reflection in, and Millefeuille slices like Napoleons, all without eggs, and all at a lower cost than using eggs.

“I have witnessed an incredible growth for what we do,” stated Jessica Mckenzie, the founder of Vegan Gastronomy’s product division Free From That. “We have taken a big company approach and a mainstream focus to what we do and we have been able to put together the most interesting products in unforeseen ways to make the perfect textures and mouthfeel for both our students and companies wanting to veganize popular dishes.”

“From Pine Tree Bark, to Locust Beans native to the Mediterranean Island, to advanced versions of Potato Proteins, my team has developed a powdered mixture that Laduree and other Macaron manufacturers in Paris, USA, Japan and Hong Kong will use to embrace the modern vegan age,” stated Stephanie Prather, Founder of Vegan Gastronomy. “We are thrilled to be the ‘engine’ behind so many different leading companies embracing adding vegan versions of their product. We are here to help build the perfect products.”

Vegan Gastronomy Culinary Academy is the world’s leading Vegan cooking academy and now also the world’s top Vegan pastry academy. Having trained over 3500 students in person and or online in the last 5 years the hands they have touched and inspired have created some of the most amazing vegan dishes that leave the customer sitting there saying “wow, this is better than the conventional recipe!”.

For information on Vegan Pastry or conventional cuisine training in person or online visit www.VeganGastronomy.com . For sample sizes of the leading products the academy has developed see https://www.vegangastronomy.com/essentials/